September came and passed swiftly with with the fresh, autumn wind. The Tri Team has joined Billie Joe Armstrong and awoken in the forefront of this upcoming October. But let us recap on the chilly happenings the past month had to offer.

Even though Tess decided to call a dog over instead of cheer for us, Oktoberfest 2017 went swimmingly. CSU earned a 2nd place spot! Despite inclement weather conditions, everyone persevered and shivered their way to the finish. Erik Peterson, Wilson Norris, and Ian King, (2nd, 3rd and 4th place respectively) buckled down and got their chores done, nearly sweeping the podium. In addition to cleanliness, the team exemplified a positive attitude, resulting in a good time for everyone. This was the first race for quite a few new members, and they proved themselves to be tough as nails. This season is looking good.
We were lucky enough to have a top notch photography crew (Laila Al Adwani, Matthew Burnett) who seamlessly captured some of the highest quality race faces to date. These faces embody the intense feelings of pain, agony and despair that are commonly considered enjoyable to a hardworking triathlete. Pictured below are Nick Johnston, Jacob Brown, Gracie Moore and Grayson Barber (top to bottom). Fun fact: Green Day wrote their hit, Wake Me Up When September Ends, after completing their first triathlon.

The World of the Unknown:

With Halloween right around the corner, there seemed to be some spooky mysteries occurring this month. These questionable pictures appear to have no reasonable explanations. Could the paranormal be at work? 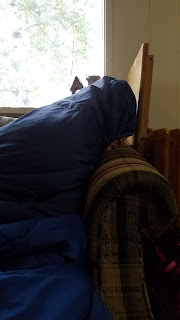 Not to brag, but we have some pretty impressive athletes on this team. Matthew Burnett, Erik Peterson, Coach Mace, and Elise Lagerstrom raced 70.3 World Championships in Chattanooga Tennessee. The toasty southern sun fueled them as if they were photosynthetic beings. There is no weather condition that can stop a CSU triathlete!

As much fun as they had racing, it's a good thing it's over because now Matt can finally get his knee fixed. After racing on a torn ACL it's now time for some much deserved rest and recovery before starting training back up for another busy season.

The ITU World Championship was also this month in Rotterdam. Coach Tess and Shea Mielke competed this year as well as explored the beautiful city. Tess even has family in that area, how convenient! Vacay goals if you ask me. The race and trip were undoubtedly unforgettable, pretty neat to see how hard work translates into huge pay offs.

Coach Mace and his family are kind enough to open their cabin doors to us each year to hold our fall retreat. This is a great time for team bonding, awesome trail runs, and finding out who can't drink milk. This year we learned that Nick Johnston has had an intimate encounter with a spunky, open minded giraffe, Iz only got lost for 13 miles, and we were each individually stung by a wasp at least once. And I know I am not alone in saying I wouldn't have rather spent the weekend any other way. How lucky are we to be surrounded by genuine, supportive, like-minded people? It's easy to get caught up in the hustle and bustle of our daily lives, but it is important to take a step back every now and again and gaze longingly into Daisy's dreamy eyes. Let her puppy dog innocence remind you to enjoy this wild ride.

"The devil is in the details."
-Coach Mace

Work Out of the Month

What is your favorite leg of a triathlon?